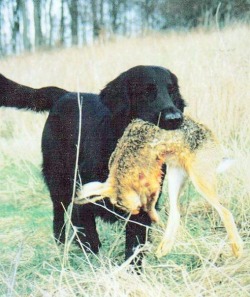 Foxpath Ranulph, my wonderful Trefor. We shared so many good times together. He was a sensible dog who was pride of the shoots he went on. A tireless worker and good gamefinder. In the first picture he is carrying a full grown hare and in the second a cock pheasant. He loved working and this included 'dogging in' on the shoots too.
Pictures of him were used by Butchers Dog Food on their stand at the CLA Game Fair, and at Crufts Discover Dogs held by the UK Kennel Club.
He was lightly shown at Championship level, his last show was the Flatcoated Retriever Society championship show where he won 1st in Maiden Dog. He qualified for Crufts. Many flatcoat pictures appearing in shooting magazines are of him or his mother Lucinda. Mated to Riversflight Meodail Trefor produced the first Clemendy litter and is the great grandsire to Clemendy 'D' litter..
Sire Larksdown Quartz Of Fenstorm x Dam Kenkew Mistress Of Foxpath 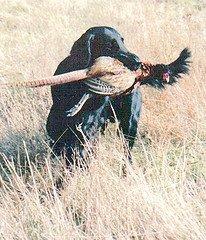