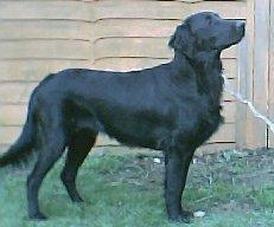 Arthur in the picture left is 5 months old, the two pictures below are Arthur as a  mature dog. Arthur was shown as a young dog.  At his first championship show held by the Flatcoated Retriever Society , judge Mr Peter Forster (Wizardwood), awarded him 1st in Minor Puppy Dog (age 6 months).  He qualified for Crufts and  won a place in the line up  at his last show the following year, which was the Flatcoated Retriever Society Championship Show judge Ann Youens (Riverglide).