Foxpath Darnel was a lovely dog very rarely out of the winning line up at Championship shows, he was handled in the show ring by my daughter Helen. Helen started handling him when she was eight years old. He qualified for Crufts. Our favourite awards he won were at the local school pet show where he won Best Behaved Pet and Pet The Judge Would Most Like To Take Home, through out these classes he was surrounded by a mixture of pet rabbits, chickens, cavies, a pony and a pet goat as well as other dogs. A true testament to his calm and gentle nature.
Helen worked him on shoots and at gundog training classes, where she impressed the late hon. Amelia Jessel (Collyers) with her handling skills. He was a kind and biddable dog who gave everything and more for his young handler. Pictured above on the left as a nine month pup and on the right as a mature adult. 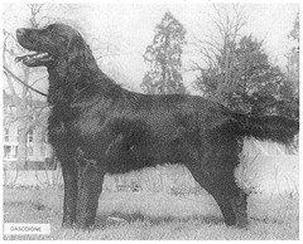 Foxpath Dock, a rather grainy picture of Jasper, taken just after winning the Reserve CC under Joe Braddon at Southern Counties Championship Show. Jasper worked on shoots for his owners Gavin & Carol Palmer.